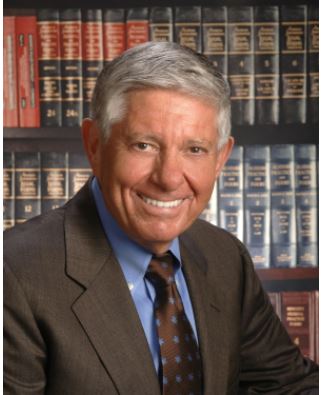 Louis T. Brindisi was born in Utica, New York, and has lived there all his life, having attended local schools. He attended LeMoyne College in Syracuse, New York, and graduated with a Bachelor of Science Degree in Economics in 1956. He graduated from Albany Law School with a Juris Doctor Degree in 1959 and was admitted to the New York State Bar in 1960.

After Albany Law School, he went into private practice and now practices with his daughter, Eva Brindisi Pearlman, and son, Anthony Brindisi, both lawyers and partners in the law firm that also bears their name. With 60+ years of trial experience, he has handled thousands of cases, both civil and criminal. In his criminal law practice, he has successfully tried cases involving almost every major felony in both State and Federal Courts. In his civil law practice, he has successfully tried or settled cases ranging from SUV rollovers, tire defects, seatbelt failures, air bag injuries, seat back collapse, roof crush injuries, and other failure to warn or design and manufacturing defect cases. Some other notable civil cases he has tried involved the Federal Employer Liability Act, elevator malfunctions, medical malpractice, nursing home negligence, legal malpractice, construction accidents, discrimination, defamation, and premises liability claims. These wide range of civil cases include his representation of clients with serious personal injuries, including, wrongful death, traumatic brain injuries, birth defects, amputations, quadriplegia, paraplegia, and other spinal injuries, and severe disfiguring burns and scars.

His practice is now limited to the trial of serious personal injury and wrongful death cases. He and his firm have achieved numerous multi-million-dollar verdicts and settlements.

Louis is a member of the American Association for Justice (he is a past ATLA District Governor, updating national decisions of courts from the field of medical malpractice, products liability and personal injury); the New York State Trial Lawyers; the New York State Academy of Trial Lawyers; the National Board of Trial Advocates (where he holds the rank of Advocate); the Multi-Million Dollar Advocates Forum; the Association of Trial Lawyers in America; the American Society of Legal Advocates; the Motor Vehicle Trial Lawyers Association; the National Trial Lawyers Association; the Medical Malpractice Trial Lawyers Association; the Association of Plaintiff’s Interstate Trucking Lawyers of America; the American Society of Legal Advocates and the Association of Motor Vehicle Trial Lawyers. Louis has also been named as a member of the National Association of Distinguished Counsel, an organization dedicated to promoting the highest standards of legal excellence. The mission of the NADC is to objectively recognize the attorneys who elevate the standards of the Bar and provide a benchmark for other lawyers to emulate.  By virtue of the incredible selectivity of their research process, only the elite few are invited to join the ranks of the NADC. Specifically, less than 1% of practicing attorneys in the United States are members of the “Nations Top Attorneys.” The recipients of this prestigious award have demonstrated the highest ideals of the legal profession. Louis is also a member of Trial Masters™, which is an elite national organization composed of lawyers with significant courtroom experience. Membership is an indication of a strong commitment to taking their clients’ cases all the way to the courthouse when warranted. Membership in Trial Masters™ is limited to attorneys in good standing with the Bar and have stellar reputations for their trial experience. Fewer than 1/2 of 1% of the attorneys in the United States are members in Trial Masters™. He has been named by Lawdragon as one of the top 3,000 Plaintiff’s Attorneys in America. Louis has also been named as a New York State Super Lawyer. Only 5% of the attorneys in Upstate New York are named to the list. He has also been named as one of the top 100 Trial Lawyers in New York State by the National Trial Lawyers Association. The National Trial Lawyers Association is a professional organization composed of the premiere trial lawyers across the country. Membership is obtained through special invitation and is extended only to those attorneys who exemplify superior practice in the field of law. Louis has been selected by his peers to be included in the Best Lawyers in America and the law firm which he has founded has a ranking in the U. S. News – Best Lawyers “Best Law Firms” Rankings. Louis has also been named a Top 25 Mass Tort Trial Lawyer. This honor is bestowed to the top 25 and best Mass Tort lawyers in New York State. This recognition signifies Louis as accomplished and skilled in Mass Tort law.