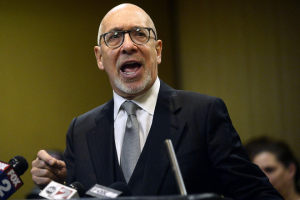 Marc J. Bern is the founding partner of Marc J. Bern & Partners LLP, a law firm headquartered in New York City that handles complex litigation across the United States. Mr. Bern focuses his practice on representing plaintiffs in mass tort cases, FELA railroad litigation, personal injury cases, product liability cases (including pharmaceutical and medical device injury cases), environmental litigation, and a wide variety of other types of cases involving catastrophic harm or property damage. With more than 35 years of experience as a litigator, Mr. Bern has led over 100 cases to a jury verdict. In addition, he has a successful record of achieving settlements of over $1 million in hundreds of cases.

As a litigator, Mr. Bern advocates forcefully for his clients, achieving success for them with his experience and tenacity in the courtroom. He is a member of the prestigious Million Dollar Advocates Forum and has been featured in Who’s Who in American Law. Martindale-Hubbell has awarded Mr. Bern its pre-eminent AV rating: “Highest Rating in Legal Ability and Ethical Standards,” for over 20 consecutive years. In 2007, Lawdragon included him among its ranking of the Top 500 Plaintiff Lawyers in America.

Mr. Bern has been designated a New York Super Lawyer® every year since 2006. In 2007, he was honored to become a charter member of the Litigation Counsel of America. Mr. Bern has been selected as one of “America’s Premier Lawyers” by Fortune Magazine and has been named one of the Top 100 Trial Lawyers by the National Trial Lawyers. Mr. Bern also sits on the prestigious Board of Trustees of the New York City Police Museum.

Mr. Bern graduated from the Chicago-Kent College of Law at the Illinois Institute of Technology. Prior to attending law school, he graduated with distinction from the University of Wisconsin-Madison. He is admitted to practice before state courts in New York and Wisconsin and before the U.S. District Courts for the Eastern and Southern Districts of New York. He has tried cases and has argued legal issues in courtrooms across the United States.