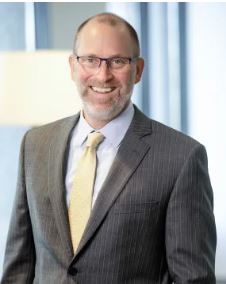 Michael K. Johnson is a founding partner of Johnson Becker, PLLC. Michael exclusively handles plaintiffs’ personal injury cases, with an emphasis on national products liability litigation, and a sharp focus on medical device and pharmaceutical litigation. He currently represents individuals throughout the country in claims involving defective medical devices, harmful pharmaceuticals, over-the-counter products, nutritional supplements, and other dangerous and defective products. Michael currently serves as the Co-Chair of the Products Liability Section of the Minnesota Association of Justice. Nationally, he is involved in numerous mass tort litigations representing injured individuals. He has participated in the resolution of global settlements in product liability litigations and has sat on leadership committees in a variety of mass tort litigations.

Michael has battled major corporations in the courtroom, appellate courts, and up to the U.S. Supreme Court. He believes that corporations that choose to put profits before safety need to be held accountable. As a result of his dedication to his clients and their cases, Michael was selected as an Attorney of the Year by Minnesota Lawyer in 2009. In addition, in 2012 Michael was awarded the Stephen J. Sharpe Public Service Award by the American Association for Justice. The Award is presented annually to an attorney and their client whose case tells the story of American civil justice and helps educate state and national policy makers and the public about the importance of consumers’ rights.

As part of his medical device and pharmaceutical practice, Michael has acquired an extensive working knowledge of federal preemption. Additionally, Michael has been involved with legislative lobbying efforts to defeat federal preemption and restore the right to a trial for the injured. As part of these efforts, Michael has made numerous trips to Washington, D.C. with his clients who have been injured by defective medical devices and pharmaceuticals to meet with both Democratic and Republican leaders of the Senate and House of Representatives. Michael has also been invited to contribute his expertise in meetings with both the Food and Drug Administration (FDA) and the Office of the United States’ Solicitor General to discuss issues involving pharmaceutical preemption. Most recently, Michael spoke at FDA’s Stakeholder Meeting Supplemental Applications Proposing Labeling Changes for Approved Drugs and Biological Products in support of FDA’s proposed rule that would make generic prescription medications safer and would hold generic manufacturer’s accountable for their failure to warn of dangerous adverse side effects associated with their drugs. Michael has been quoted in numerous media outlets regarding medical device and pharmaceutical litigation.

Exclusively representing Plaintiffs in the following types of cases: