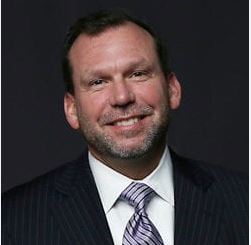 Ricky A. LeBlanc is the Managing Attorney of Sokolove Law. After graduating from Suffolk University in Boston, Ricky began practicing law in December 1991 — giving him nearly 30 years of experience under his belt.

As the Managing Attorney, Ricky directs the asbestos practice and oversees all of the firm’s other practice areas, such as birth injuries, medical malpractice, nursing home abuse, and product liability, including pharmaceutical and medical device cases.

His goal is to help the working-class and victims of corporate greed receive the justice and compensation they may deserve.

In addition to other duties, Ricky also provides oversight to the Sokolove Law team of paralegals and case managers. He helps educate the group on the many complexities of mesothelioma claims, such as statutes of limitations, the science of asbestos-related diseases, asbestos-containing products, and avenues of exposure.

He personally reviews each potential mesothelioma claim that comes through the firm to determine whether the victim may be eligible for compensation.

Ricky is licensed through the Office of the General Counsel for the U.S. Department of Veterans Affairs (VA). This means he is accredited to assist in preparing, presenting, and prosecuting claims for VA benefits. Through this work, Ricky is able to carry out his passion for serving those who bravely served our country.

Q&A With Ricky A. LeBlanc

Ricky A. LeBlanc discussed his work for mesothelioma victims on The Balancing Act® airing on Lifetime Television®.

Why did you pursue a career in the law in the first place?

As the son of a pipefitter and my mother who was a factory worker, I always had a keen sense for fairness, and growing up in a dying Massachusetts factory town, I saw that folks with lower incomes or education levels did not always get fairly treated because there was nothing they could do about it.

I had always admired what a skilled attorney could do to balance this uneven playing field. Whether it was to protect someone’s civil rights in a criminal trial or to stop a foreclosure or eviction to keep a roof over someone’s head, lawyers — with logic and reasoning skills — could couple those with writing and oratory skills to save the day.

I wanted to do that — save the day, make it right, make it fair.

How did you first become interested in a plaintiffs’ practice?

You have many options once you are admitted to the bar. I knew litigation was the place for me, defending or enforcing the rights of individuals or corporations. As a product of a working-class family, standing up for the little guy against major manufacturers or insurance companies was my calling.

I believe every individual or entity deserves representation, but, to me, it is just more rewarding to help an individual who has been harmed find some justice than it is to ensure a major corporation keeps more of its billions in profits.

What types of cases do you focus on?

After all of these years, asbestos litigation, primarily representing individuals diagnosed with mesothelioma, a rare cancer that’s only known cause is asbestos exposure, takes up the majority of my time.

The number of people diagnosed with this deadly disease has remained the same for decades, and there does not yet seem to be evidence of any decline in the near future.

As the managing attorney of the firm, I oversee many other case types ranging from dangerous drugs and defective medical devices to child birth injury and nursing home abuse claims.

There seems to be no end to the number of products that the pharmaceutical and medical device companies place into the stream of commerce, despite their knowledge of side effects and defects that they hide from the consumer, putting profits ahead of people.

Most unsettling, as I age along with the population of America, more and more cases of nursing home abuse seem to be coming to our office. With the number of seniors expected to rise over the next decade, this neglect will likely rise unless plaintiff lawyers can make it financially painful enough for these companies to have to stop.

What do you do as Managing Attorney?

Although the majority of my time is spent heading our mesothelioma practice, as the Managing Attorney I oversee our entire caseload to ensure each client and potential client receives superior service and, if qualified, is assigned to a team that will provide the best result for our client.

I head our Risk Management committee which tracks the progress of each inquiry to ensure it is progressing or declined in a timely manner.

Because our founder recognized decades ago that the people are often not aware of their rights or how to access the civil justice system, our firm provides education through our advertising.

Is there a case in your career that stands out as a “favorite” or one that is particularly memorable?

I have many, but two that illustrate why I do what I do and why I am sure many plaintiffs’ lawyers do what they do. The first is a sad case, as all mesothelioma cases are.

I had represented the widow of a man who had died from mesothelioma. The widow was a young, athletic-looking, early 50s woman when I met with her and her 20-something daughter and brought her husband’s case to a successful conclusion. But a few years later, I received a call from the daughter telling me that her mother had also developed and lost her own battle with mesothelioma.

This illustrates the relentless destruction asbestos causes, first by attacking those who worked with it directly and then attacking the unsuspecting family who was exposed through the clothing of the worker, often the husband or father.

All this destruction would be avoidable if manufacturers had any morality and just used an alternative to asbestos or at least warned of the dangers of asbestos. But there is no limit to corporate greed.

The second case would be funny but for the fact we are talking about human life. I was again representing a family where the husband-father had died from mesothelioma. He was a chemist and engineer who made the dye for making asbestos floor tiles in many different colors.

These manufacturers knew asbestos killed but did not warn anyone. Once they were caught, to protect products they then began to say the asbestos in their product could not cause harm. In this case, they said the asbestos was encapsulated in the floor tile and the only danger was to the person who poured the raw asbestos into the hopper to mix into the epoxy and dye to make the tile.

But, when I walked into court with a box of the asbestos floor tile manufactured decades before that I had recovered from my client’s basement I got the 10-12 defense lawyers’ attention. And when I dropped that box, and decades of dust billowed from it as it landed on the desk, they all ran for the door asking me if I was crazy. I said I thought the asbestos was safely encapsulated. The case resolved shortly thereafter.

We do what we do because the defendants will say anything, even if they don’t believe it, to protect big corporate profits.